She said NO, but they didn’t take her seriously! 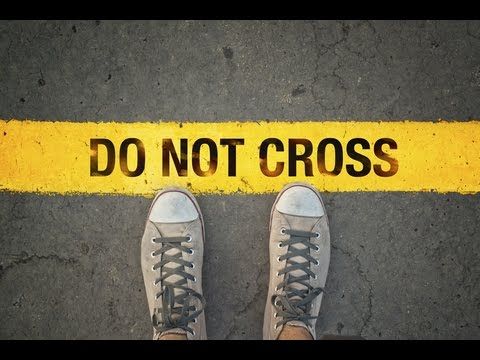 The day our daughter told two boys to “stop!”

One third of our Fortress Building Class is focused on creating personal boundaries.  There is a personal reason that we spend that much time on this important piece of self-protection.  It started with our daughter.

It started as fun.

When our oldest daughter was a senior in high school, she had two close friends that were guys.  It was a common occurrence for them that when they hung out, in true brotherly-sisterly style, they would rough house a bit.  (Remember that our daughter has FOUR brothers and has practiced rough housing with them for her entire life).  On this particular evening, they started a wrestling match.  My daughter is super strong, and she gives as hard as she gets, so a clear winner was NOT predetermined.  At first is was fun and playful like all the times in the past.  And then it changed.

The wrestling became rougher than she was comfortable with, and she said, “stop it.”  They didn’t.  As more time past, she found herself saying “stop” repeatedly, and her pleas fell on deaf ears.  Although she received some bruises and rug burns, eventually the wrestling stopped.  She left shortly afterwards.  When she came home that evening she was clearly distraught, and we listened to her story.

Our experience of her story.

As we listened to her story, two things became clear. First, she was REALLY upset that the two boys she trusted wouldn’t listen to her when she said “stop.”  She was shocked and hurt and a bit afraid.  She was looking to us to try to explain the behavior.  Second, as she told us what she said to the boys, and how she said it, we were certain that although she felt like she was being clear, the manner in which she was saying “no”, could sound to the boys that her pleas were all part of the fun.

How does this happen?

This is what we learned.  We had taught our daughter to say “no” if she was ever uncomfortable at any time with physical play or other contact with others.  We hadn’t taught her how.  Like I am sure most of you out there with children know, it is part of the parenting process to talk about unwanted touching.  We teach them to say “no.”  We teach them to be vocal.  If you are like us, we didn’t teach her how to say “no” in a way that the message would be clear.

After hearing her story we talked to her about the skills necessary to make her message clear.  In this instance she was in a situation where rough housing was part of the play, so in especially in this situation, her verbal cues needed to be REALLY strong.  When she first said “stop.” She said it with a bit of a laugh, because she was uncomfortable about setting the boundary with her friends.  So, when they didn’t listen, she said it more frequently.  At no time did she assert herself strongly.  But because of her discomfort in confronting them, she felt like she had been clear.  We then taught her that if after her first attempt to say “no” or “stop”, if the boys weren’t stopping, then she needed to escalate with her voice and her body language.

When being Foul isn’t Foul.

It is very common for women to believe that they were clear when they “held” or established a boundary, but in looking back, what felt like SUPER forceful, really came out as a mild request.  This is because we have to push past our place that says if we are forceful we might be rude, or we might hurt his feelings, or other of the many reasons we have a hard time speaking up.  If this resonates with you, then just know that when you are ready to set a boundary, you have to be MUCH MORE forceful than you intend.  If you do that, your request will come across clear. And if it is to save your life and keep yourself safe, go ahead and drop an f-bomb if your message isn’t being heard.

It’s easy to hear this story and believe that if we were in the same situation, we would be CLEAR with our message.  But ask yourself how you have responded to the following scenario, and were you clear about your intentions?

You walk to your car, and out of no where, a person approaches you and says, “can you help me with a little gas money?”

How did you respond?  Was the person close enough that within one or two steps, he could have his hands on you?  Where you trapped between the person and the car?  What did you say to him?  Did it make him back off? Give you more space? or did he continue standing within reaching distance while you dealt with the uncomfortable situation?

If you have found yourself in similar situations, and you were frightened by how close the potential danger was to you before you ever realized it.  Then start with our Situational Awareness Class to learn how to recognize where the danger may be hiding so you won’t be caught unaware.  If you have found yourself telling people “no” and they didn’t listen, or you set boundaries that were not honored, then take our Fortress Building class.  You will learn what a clear message sounds like, why they work, and how setting boundaries gives you the leg up you need to escape if needed.

Don’t find yourself in the same situation our daughter did.  Come to class and learn what a strong personal boundary looks like, and how to send a clear message that you mean business.

P.S. This article is NOT intended to blame the victims of assault.  It is shared with love, in hope to educate people on holding and setting clear boundaries.

*Bonus: Don’t ever be afraid in a parking lot again! Get your free guide on how to use Situational Awareness to stay safe. “5 Steps Anyone Can Do to Navigate a Parking Lot Safely.” Click here to get your guide!